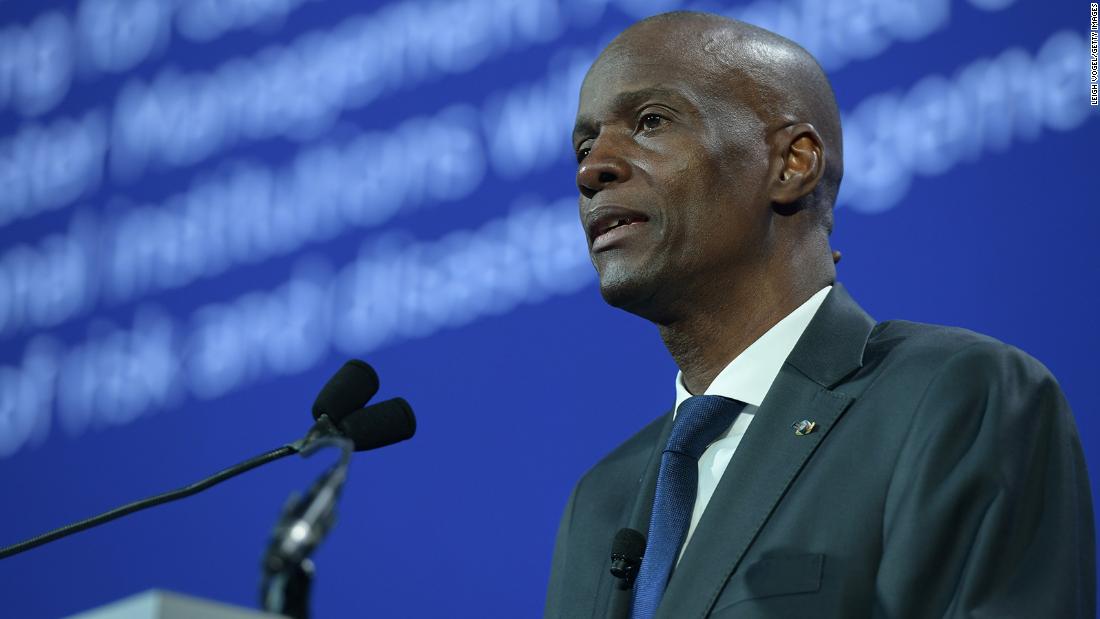 Haitian President Jovenel Moise killed in attack on his residence

The assailants stormed Moise’s home around 1 a.m. and fatally wounded the head of state, according to the acting prime minister, who called the assassination “a heinous, inhuman and barbaric act” .

Haiti’s first lady Martine Moise was shot and wounded in the attack and is being evacuated to a Miami hospital for treatment, Haiti’s ambassador to the United States said .

His condition is stable but critical, Ambassador Bocchit Edmond said during a press briefing.

“We are trying to move forward and see how we can identify more of those who participated in this horrific act,” he said.

Edmond added that the suspects who were arrested and killed were foreigners and that the police are in the process of determining their nationality.

He believes the suspects received assistance from Haitian nationals because of the vehicles they used to get to the presidential residence where Moise was killed.

Earlier, Edmond had said during the press briefing that the attackers were “mercenaries” and called them “well-trained killers”.

Video from the scene showed them speaking Spanish and they introduced themselves as agents of the Drug and Enforcement Administration (DEA), he said.

“I think they are bogus DEA agents,” he told reporters on Wednesday.

â€œWe don’t know how they got in,â€ Edmond said, adding that they didn’t know if the attackers were still in the country. He said that if they had left, it would be via a land border with the Dominican Republic because Haiti would have detected a departing plane and the airport has been closed since the attack. He said the airport would reopen “once we get this situation under control”.

The country has been reeling from the violence for weeks. Addressing the nation in a televised statement, Acting Prime Minister Joseph declared a “state of siege” in Haiti and pleaded with citizens to remain calm.

“I and all the ministers have been working since the news broke and we want to assure you that we will bring the assassins of the president to justice,” he added. “Please stay calm and let the authorities do their job. We don’t want the country to fall into chaos. It is a very sad day for our nation and for our people.”

The state of siege is the middle of three levels of emergency under Haitian law, alongside the lower “state of emergency” and the highest level called “state of war.”

Under the state of siege, national borders are closed and martial law is temporarily imposed, with the Haitian army and national police empowered to enforce the law.

Moise, 53, was a former banana exporter and a divisive figure in Haitian politics. He has spent most of the past year waging a political war with the opposition over the terms of his presidency.

For now, it is not immediately clear who will replace him. Judge Jean Wilner Morin, president of the National Association of Haitian Judges, told CNN that the line of presidential succession in the country is now murky.

The Haitian president of the Supreme Court would normally be next on the list, but he recently passed away from Covid-19. For Acting Prime Minister Joseph to officially replace the president, he would have to be approved by the Haitian parliament, Morin said. But without recent elections, parliament is effectively dead.

Throughout his presidency, Moise had repeatedly failed to hold elections at the local and national levels, leaving much of the country’s government infrastructure empty. A constitutional referendum is due to take place in September, alongside the presidential and legislative elections. Municipal and local elections are scheduled for January 16, 2022, the official electoral calendar also said.

Many in the country had challenged Moise’s right to continue serving as president this year.

While the United States, the United Nations and the Organization of American States have backed his claim for a fifth year in office, critics say he should have stepped down on February 7, 2021, citing a constitutional provision that starts l clock once a president is elected, rather than when he takes office.

Moise, however, claimed that his five-year term is due to end in 2022 as he was not sworn in until February 2017. His inauguration was delayed due to allegations of voter fraud in the 2015 election, which resulted in led to a presidential runoff which was postponed twice as much as the authorities. called threats and “security issues”.

Nou Pap DÃ²mi, one of Haiti’s main opposition groups, condemned the assassination. The group, which had previously been extremely critical of Moise and corruption in the country, said in a statement it was shocked by the news and called for unity and de-escalation.

“We cannot continue to count corpses daily (…) all victims of massacres and assassinations must find justice and those responsible for these acts must be brought to justice,” the group said.

Worsening of the situation

Moise’s death takes place amid extreme violence in Port-au-Prince, the Haitian capital, which claimed the lives of many citizens and particularly worsened in June.

Rival groups have fought among themselves or with the police for control of the streets, displacing tens of thousands of people and exacerbating the country’s humanitarian crisis. The infamous ex-policeman Jimmy Cherizier vowed last week to local media to lead a “revolution” in the city.

Moise’s private residence is located in PÃ©tion-Ville, in the Haitian capital Port-au-Prince.

Meanwhile, the coronavirus pandemic has worsened in Haiti in recent weeks. The country is one of the few in the world that has yet to start getting vaccinated against the virus.

Last month, the Pan American Health Organization (PAHO) warned that the response in the country needed to be significantly stepped up to deal with the sharp rise in cases, hospitalizations and deaths.

PAHO Director Dr Carissa Etienne said she would step up efforts to help Haiti with the immunization program. “I am optimistic that the arrival of vaccines in the country can begin to reverse the trend of the pandemic and bring some relief to the Haitian people in these very difficult times,” Etienne told reporters during the weekly briefing of the organization Wednesday.

Haiti has reported more than 19,000 Covid-19 cases and 462 deaths, according to the Johns Hopkins University tally.

At the same time, the impoverished Caribbean nation faces a dire economic situation. Its economy had contracted even before the pandemic and shrank a further 3.8% in 2020, with around 60% of the population now living in poverty, according to the World Bank.

UNICEF, the United Nations children’s agency, said in May that severe acute malnutrition in children is expected to more than double in Haiti this year due to the rise in violence, Covid-19 and the lack of access to essential services.

World leaders denounced the attack, while expressing their condolences and solidarity with the Haitian people.

United Nations Secretary General AntÃ³nio Guterres condemned the assassination “in the strongest terms”, saying “the perpetrators of this crime must be brought to justice”.

In a statement released by the White House, US President Joe Biden said: â€œWe are shocked and saddened to learn of the horrific assassination … and the attack on Haiti’s First Lady Martine MoÃ¯se. send my most sincere wishes for the recovery of the First Lady Moses. “

Speaking to reporters later, Biden said, “We need a lot more information – but it’s – it’s right – it’s been very worrying for the state of Haiti,” he said. he told reporters.

Chilean President Sebastian PiÃ±era called “for unity and peace to strengthen democracy and find a way out of the serious crisis that Haiti is going through”, while Colombian President Ivan Duque condemned the “cowardly and barbaric” murder.

British Prime Minister Boris Johnson called for calm, saying he was “shocked and saddened” by Moise’s death. And Spanish Prime Minister Pedro Sanchez tweeted a statement saying: â€œSpain strongly condemns the assassination of the President of Haitiâ€¦ We call for the unity of political forces to find a way out of the serious crisis the country is going through.