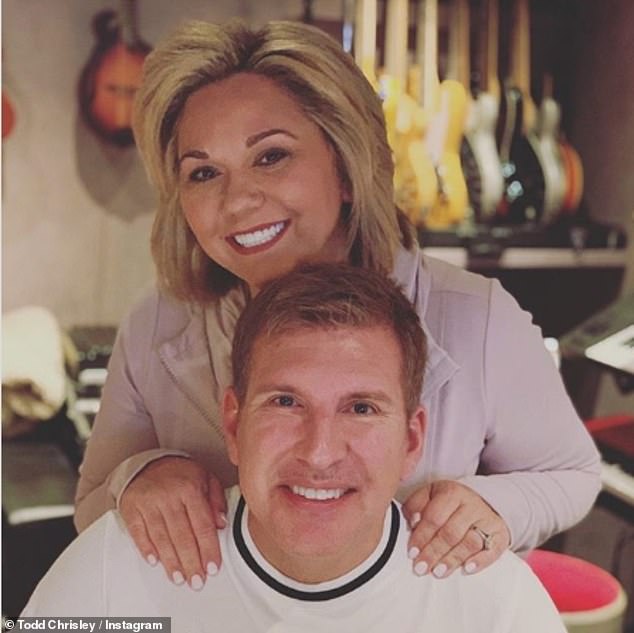 Prosecutors allege the couple submitted false documents to the banks when applying for the loan, and Julie submitted a fake credit report and bank statements while trying to rent a home in California.

The couple then reportedly refused to pay rent on the property for a few months after they started living there in October 2014.

Additionally, the Chrisleys are accused of using a film production company to hide their income in an attempt to prevent the IRS from collecting $2 million in unpaid taxes that Todd owed the federal government.

The couple are now thought to be worth around $9 million.

Their accountant, Peter Tarantino, meanwhile, is charged with one count of conspiracy to defraud the United States and two counts of willfully filing false tax returns. He is about to stand trial alongside the Chrisleys.

The Chrisleys and Tarantino pleaded not guilty to the charges and were released on bail.

The couple star in reality show Chrisley Knows Best, which was recently renewed for another season

The charges against the Chrisley family

Prosecutors allege the couple submitted false documents to the banks when applying for the loan.

They also say Julie submitted a fake credit report and fake bank statements while trying to rent a house in California.

The couple then reportedly refused to pay rent on the property for a few months after they started living there in October 2014.

Additionally, the Chrisleys are accused of using a film production company, 7C’s Productions, to hide their income in order to prevent the IRS from collecting $2 million in unpaid taxes.

Their accountant is also charged with one count of conspiracy to defraud the United States and two counts of willfully filing false tax returns.

The main evidence against the Chrisleys comes from emails Todd Chrisley sent to a business partner at his Georgia-based company Chrisley Asset Management (CAM) asking to falsify financial documents.

Between 2008 and 2012, CAM managed and sold foreclosed properties.

The lawsuit alleges that Chrisley tricked the banks into giving him and his wife large loans by convincing them they were personally worth millions.

He states that the Chrisleys and a former employee “conspired to submit false documents, such as fabricated bank statements and false personal financial statements, to financial institutions in order to obtain millions of dollars in loans, which they used much of it for their own benefit”.

The lawsuit gave an example, from November 5, 2007, of how the trio tricked a bank into believing the Chrisleys had $4 million in an account with financial institution Merrill Lynch to secure a loan.

In fact, according to the lawsuit, the Chrisleys didn’t set up a Merrill Lynch account until 2008, and the account never had more than $17,000.

In 2008, a bank demanded updated financial information from the Chrisleys. The alleged co-conspirator then told Todd that they would need help putting together the financial details.

The lawsuit states that Todd wrote to “if you don’t know how to do this, then find a crooked accountant to do it”. Ask [redacted] who her guy uses to do his twisted bullshit.

Prosecutors say they tried to hide their involvement by falsely claiming they had no idea their then-employee had submitted false documents, according to the indictment.

Prosecutors also allege Julie Chrisley sent a fake credit report and bank statements showing significantly more money than they had in their accounts to a California landlord in July 2014 when he was trying to rent a house .

A grand jury in the U.S. District Court for the Northern District of Georgia’s Atlanta Division also accuses their accountant Peter Tarantino of falsifying tax returns

A few months after they started using the house, in October 2014, they refused to pay the rent, forcing the landlord to threaten them with eviction, according to the indictment.

He also claims that the money the Chrisleys received from their TV show went to a company they controlled called 7C’s Productions, but they did not report it as income on federal tax returns.

The couple then failed to file or pay their federal income taxes on time for several years, according to the indictment.

Tarantino also allegedly helped the Chrisleys hide their income and lie on their tax returns, telling the IRS that Todd Chrisley didn’t have enough money to pay a tax debt from 2009 despite the money coming in. their production company that they spent on personal purchases.

He also filed false tax returns for 7C’s Productions to make it look like the company wasn’t making any money, the indictment alleges.

Then, after federal agents served a grand jury subpoena on the 7C productions in February 2018, Julie Chrisley submitted a fraudulent document, according to the indictment.

In total, the couple is accused of evading nearly $2 million in taxes.

Chrisley Knows Best, follows their tight-knit and rowdy family on the USA Network

The Chrisleys have denied the claims, with Todd writing in a lengthy statement on Instagram that he was being set up even before the charges against him were filed.

He said he knew he and his wife were going to be named in a federal indictment for tax evasion “and probably a bunch of other financial crimes as well.”

He said the charges stemmed from a dispute with an unidentified former employee who he said was fired after the Chrisleys found out in 2012 that he was stealing from them.

“I tell you all this now because we have nothing to hide and have done nothing to be ashamed of,” he wrote. “Not only do we know we did nothing wrong, but we have a ton of hard evidence and a bunch of corroborating witnesses to prove it.”