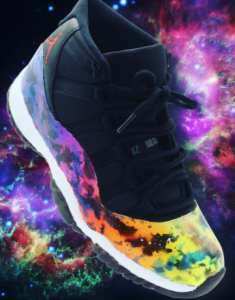 The Takeoff: Smoove Creations and the power to personalize entrepreneurship from an early age

What happens when you take a product that everyone knows and already owns, and customize it to match or fit individual styles and aesthetics?

If you’re Isaiah Kelly, 23, you are building a successful business and inspiring entrepreneurs of all ages to pursue their passion.

Kelly is the creator and president of Smoove Creations, the Newport-based startup that knows what countless other athletic shoe enthusiasts do – the â€œsneakerheadsâ€ in shoe circles – sneakers are big business. Well documented as a multi-billion dollar business, the sneaker industry thrives on the backing of prominent athletes and celebrities, as well as limited versions regularly selling online in seconds. Cowen Equity Research estimates that the sneaker resale market – an â€œemerging alternative asset classâ€ – could potentially reach $ 30 billion by 2030.

There is, however, another segment of this market that Kelly and her team of eight cater for: those who want unique and personalized sneakers to suit their own style. Kelly’s story is impressive and shows how remarkable passion combined with creativity, hard work, and the ability to seek guidance can lead to early success.

Kelly got her first taste business while working for her father Dwight, owner of a landscaping business in LaGrange. Surprisingly, Kelly had no interest in sneakers until he took a summer job at a Shoe Carnival. There, a Nike shoe captured his attention. â€œI just fell in love with this shoe,â€ he says. His passion quickly became a goal.

While seeing how sneakers made people happy piqued Kelly’s interest, it would be a YouTube video that made her think personalization could turn profitable. After seeing someone selling custom sneakers for hundreds of dollars, Kelly was inspired to try and customize shoes himself in 2017. Arriving at the University of Northern Kentucky (NKU) thanks to a college scholarship, Kelly’s evolving skills made people take notice of her designs, eventually becoming the best sneaker customizer on campus.

Kelly’s business aspirations really took off, however, once Zac Strobl, head of NKU’s Inkubator Business Acceleration Program at the Center for Innovation and Entrepreneurship, spoke at one of Kelly’s classes. Accepted into the Inkubator program in 2019, Kelly officially incorporated Smoove Creations soon after.

Kelly says he grew up with his parents always telling him he would be an entrepreneur someday, an idea he remembers being strongly against growing up. â€œBoth of my parents were like, ‘This is what we want for you,’ but I would be out there working for my dad for 8-9 hours,â€ Kelly recalls. â€œI thought to myself, ‘No, I won’t be (one day an entrepreneur). If that’s what it is, it’s not for me – I can’t do it.

The key to changing your outlook was simple and something common to all startups: finding a passion that lived up to your creativity and shared by each member of your team.

â€œAs a tailor-made business it was really hard to do all of this on my own, so I had to get people to share this vision,â€ says Kelly, recalling the challenge of growing a business. while completing his bachelor’s degree in computer science with a minor in computer science. â€œ(We) can get stressed out sometimes, but we always maintain that feeling of ‘let’s make sure we have fun’ like I did because I was having fun (and) because I liked it. was paying to do this when I started – I want people on my team with the same vibe.

Another important aspect of the launch of Smoove Creations? Network and learn from people like those he met through the Inkubator program to make sure he was ready for the long haul.

â€œThis is where I learned things like how to run a business. I barely knew the difference between income and profit, â€says Kelly of starting Smoove Creations while still a student. â€œThere were just a lot of things I didn’t know, and I was learning them while running my business, doing sales and ordering. “

Kelly has certainly made up for lost time. Despite the pandemic, Smoove Creations made around $ 40,000 in revenue in 2020. He adds that Smoove Creations is approaching $ 30,000 so far in 2021. How? By adopting skills that are crucial for all entrepreneurs: presenting your product well, generating enthusiasm and, perhaps most importantly, learning from the resources available to start-ups.

Kelly has participated in several college-focused entrepreneurial competitions, including the Global Student Entrepreneurship Awards (GSEA) where he won top prize in 2019 and 2020 among regional competitors. He took another step earlier this year when he became the first NKU student to be invited to the prestigious Rice Business Plan competition.

Now a student in NKU’s MBA program, Kelly continues to grow her business. In April, Smoove Creations received a grant from Main Street Ventures, the majority of which went towards the purchase of a new machine for faster customization of sneakers. These are among the reasons he is now touted by many as one of the most successful students to participate in NKU’s Inkubator program to date.

Kelly, who also hosts The Custom Sneaker Podcast, believes he would be further ahead if he listened to his parents a long time ago. If you are thinking of starting a business, he suggests that you find your passion and study how to be successful as soon as possible.

â€œIt’s going to sound like a super clichÃ©, but that’s because I believe it’s true: set yourself up and focus as much as possible on your goal and try not to let anything stop you,â€ he says. â€œI’ve seen a lot of people have opportunities, but they just don’t take advantage of them. My goal is to capitalize on any opportunity that I see or that comes my way – I will definitely walk through that door.

It probably won’t hurt to have a new pair of custom sneakers when you do.

Blue North’s mission to empower startups and small businesses. All questions are welcome. Small business owners and entrepreneurs can contact Blue North here. This Blue North column is a regular column in the NKyTribune.